Jamie Cushman is a sports writer from Plainville, Mass. A recent sports journalism graduate of the University of Massachusetts, Cushman spent three years as a sports writer for the Massachusetts Daily Collegian. For the Collegian he covered men’s lacrosse and soccer and women’s basketball, soccer, and softball, among other sports. In January 2017 Cushman’s profile of Megan Rice and the Amherst Regional girls softball team was featured on ESPN.com as a part of the The National Anthem Experience. Cushman also spent the spring semester of 2017 as a sports intern for the Daily Hampshire Gazette, covering a wide range of local high school and college sports.

As fans rose to their feet for the national anthem at an Amherst Regional High School girls’ volleyball game in October, 11 Hurricanes players went down on one knee, placed their hands on their hearts and directed their eyes to the flag.

One player remained on her feet.

At the end of the line of players stood senior Megan Rice, one hand on her heart, the other hand on the shoulder of her kneeling teammate Claire Basler-Chang.

“I know that there are injustices; that’s just not the way I’m going to express it,” Rice said. “But I totally supported my teammates and was proud of them for being able to do that and stand up for what they believe in.” 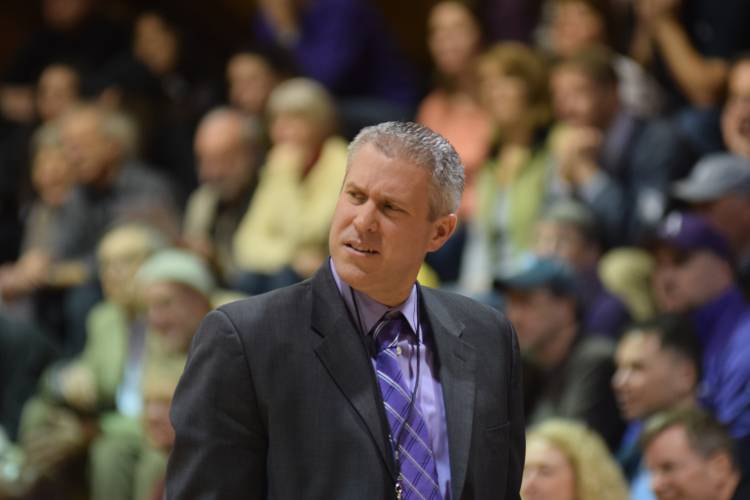 The Amherst College women’s basketball team jumped out to a 13-0 lead in the first quarter and never looked back, rolling past UMass Dartmouth 73-33 on Saturday in the NCAA Division III Tournament Elite Eight matchup.

Top-ranked Amherst (31-0) heads back to the Final Four for a second-straight season where it will face Christopher Newport (29-2) at Van Noord Arena in Grand Rapids, Michigan, on Friday.

After a slow start to its game the night before, Amherst coach G.P. Gromacki was pleased to see his squad dominate the Corsairs right from the opening tip.

“I think we came out and set the tone early,” Gromacki said. “We’ve seen them jump on teams in their three previous games in the NCAA tournament, we didn’t want that to happen and we really got after it offensively and defensively and kind of just let it roll from there.”

Read rest of the story here. 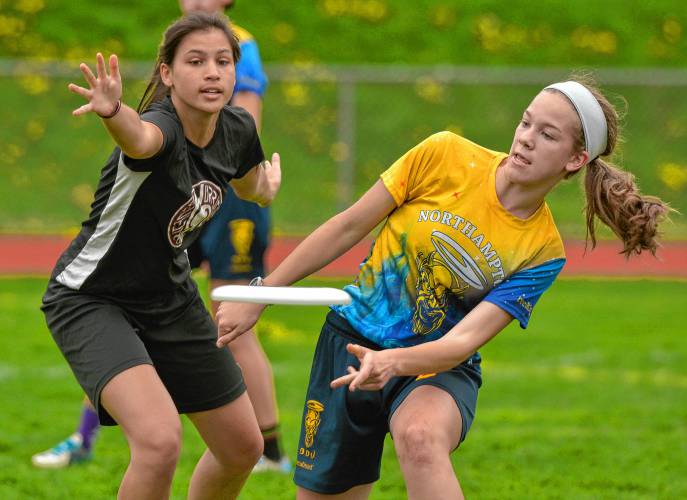 The Blue Devils’ 12-9 victory over the Hurricanes on Thursday might not rank quite as high as the first two upsets, but it does mark a major occurrence in the world of Pioneer Valley ultimate.

The win was the first time that any Northampton ultimate team, boys or girls, defeated rival Amherst in program history.

“I have to say I’m super stoked because Amherst has been our target forever so the fact that we took them on our home turf today is super exciting,” Blue Devils co-coach Sheldon Snodgrass said. “We’re all trying to not be giddy about it.”

The Massachusetts men’s lacrosse team entered a midseason matchup in 2016 against Penn State last year with a record of 3-4 after an up-and-down start to the season.

The Jekyll and Hyde nature of the team was illustrated by a convincing 16-9 win over No. 11 Ohio State and an overtime loss to No. 14 Harvard, but also by debilitating losses like a 15-7 defeat against No. 7 Brown and a 16-4 drubbing by No. 15 Albany at Garber Field.

UMass left Happy Valley with a win over Penn Sate, but did not return to Amherst all that happy, as now-senior defenseman Tyler Weeks went down with a torn anterior cruciate ligament (ACL), ending his season and effectively the Minutemen’s season in the process, as UMass lost its five remaining games, missing out on the Colonial Athletic Association conference tournament.

“We didn’t win another game without him, so it tells you what kind of influence he has on our team,” Minutemen coach Greg Cannella said.

Now, Weeks is back on the field, healthy enough to play, even if not fully recovered. With one season of lacrosse left, he’s ready to lead UMass and its young defensive core back to the CAA tournament. 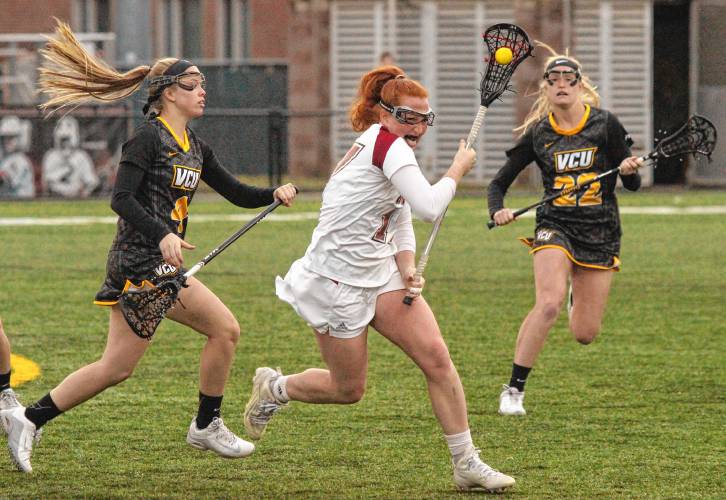 UMass senior Hannah Murphy looks for room during a game against VCU. Photo by Jamie Cushman

The Minutewomen (6-3, 1-0 A-10) controlled play from the opening draw, scoring five times within the first six minutes and scoring the first nine goals of the contest.

Murphy credited her focus and her teammates ability to box out for the record-setting performance.

“I think I was just trying to stay focused on every draw and just kind of taking my time, making sure my technique was good,” Murphy said.

Minutewoman coach Angela McMahon said Murphy was motivated after fouling out against Marist with 30 seconds left in the first half.

“I think tonight she really just wanted to redeem herself from fouling out of the last game,” McMahon said. “Obviously she wanted to win and support the team, but I think part of her felt like she owed the team to play the best game that she could, and she did that. She takes that sort of stuff really personally.” 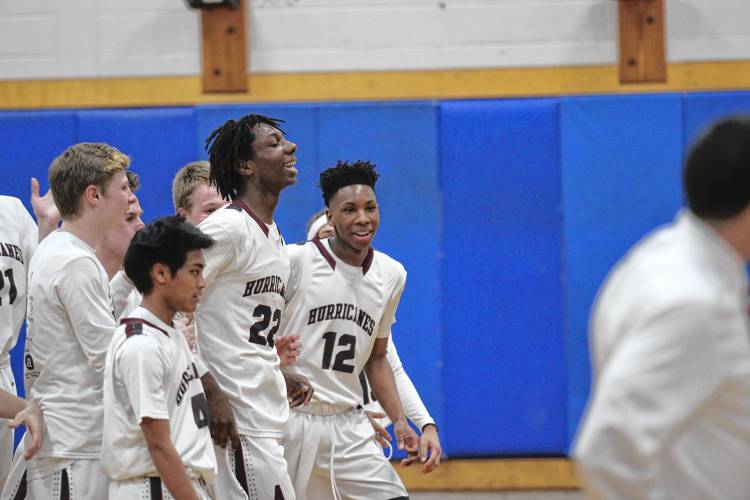 Amherst Regional senior Meikkel Murray (22) celebrates with teammates, including his brother Meikyle (12), after scoring the 1,000th point of his career during an 84-64 win over East Longmeadow. Photo by Jamie Cushman

It may have taken three more days than initially thought, but it was worth the wait for Amherst Regional’s Meikkel Murray as he tallied the 1,000th point of his career in an 84-64 win over East Longmeadow on senior night Friday.

Murray was told at the end of Tuesday’s game at West Springfield that he surpassed the milestone, but afterward the Hurricanes recalculated Murray’s total and realized he was still six points short.

“It feels way better than on West Side because I didn’t really have family or any other fans out there to see me, so to get it here at home with my family and everyone I’ve known pretty much my whole life, it was special,” Murray said.

Murray scored a game-high 31 points and the Spartans had no answer for Amherst’s most recent member of the 1,000-point club.

Murray is the first Amherst boys player to reach 1,000 points since Bayete Gordon in 1999. Jeff Osborne and Matt Garvey are the other players in the 1,000-point club.

“My coach just told me to attack, nobody can guard you, so just do your thing and keep attacking, and don’t let the missed shots get to your head,” Murray said.

Four seasons, two head coaches, 176 games. The one constant presence for the Massachusetts softball team over this time? Quianna Diaz-Patterson.

Of all the statistics that showed Diaz-Patterson’s importance to the Minutewomen, consecutive games played is at the top of the list. Diaz-Patterson started in every game over her four-year career at UMass, which came to a close last weekend.

But for Diaz-Patterson, her dependability was all about helping out her teammates rather than keeping her streak of games played alive.

“I want to do whatever I can do for the team, whether it’s me on the bench if I have to or (to) be on the field,” Diaz-Patterson said. “I’m just fortunate I got to start on the field every time. I’m very grateful for that but I worked my tail off also to get onto the field.”

Jamie Cushman is a sports writer from Plainville, Mass. A recent sports journalism graduate of the University of Massachusetts, Cushman spent three years as a sports writer for the Massachusetts Daily Collegian. For the Collegian he covered men’s lacrosse and soccer and women’s basketball, soccer, and softball, among other sports. In January 2017 Cushman’s profile of Megan Rice and the Amherst Regional girls softball team was featured on ESPN.com as a part of the The National Anthem Experience. Cushman also spent the spring semester of 2017 as a sports intern for the Daily Hampshire Gazette, covering a wide range of local high school and college sports.